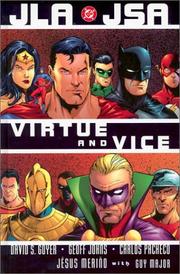 Published 2002 by DC Comics in New York .
Written in English

What themes could be explored in a JSA book that wouldn't work in JLA? , AM #2. sifighter. View Profile View Forum Posts Private Message Extraordinary Member Join Date Apr Posts 5, I think the themes of the JSA is legacy but also training younger heroes who don’t run off to become Titans. Like the JSA goes all the way. JLA/JSA book. Read 44 reviews from the world's largest community for readers. Over the years, different incarnations of the Justice Society of America an /5. However, the art is the star of this book. In my opinion the JSA hasnever looked so good and the beginning and ending shots of the JLA toweras seen from the viewpoint of Superman and Sentinel whilst floating inspace really does deserve the high quality treatment that DC have given tothis book. In summary - a classic JLA/JSA team-up book/5(21). The event and fourteenth JLA/JSA crossover, features many firsts. The main one is the official introduction of Earth-S, the home of the Shazam family and the Squadron of Justice. The latter features heroes from Fawcett Comics.

Cover pencils by Mike Sekowsky, inks by Murphy Anderson. The Most Dangerous Earth of All, script by Gardner Fox, pencils by Mike Sekowsky, inks by Bernard Sachs; The JSA is tricked into being transported to an interdimensional prison by the Crime Syndicate (using the same word 'Volthoom' that captured the JLA last issue), so the JLA must battle the Crime Syndicate on Earth-2; The JLA then .   Justice League of America Cover Dates: Oct.-Nov.-Dec. On Sale: July 5/August 2/August Writers: E. Nelson Bridwell and Marty Pasko. Artist: Dick Dillin. This was a great tale that I remember fondly, and a pretty good introduction to the JLA-JSA team-ups. The Justice League of America is the JSA's spiritual descendant. Much like the JSA, the JLA is made up of the greatest heroes of the day, brought together to fight the biggest threats. Both teams were the linchpin of their respective times, with the JSA being brought back in . Last year’s post on the JLA-JSA team-ups (or “crossovers,” if you will) proved to be one of the most popular in the short history of this blog. That post, of course, covered all the team-ups I got to experience firsthand as a comics fan as they were published. A few months after this post, I started considering the possibility of doing another one this year that would rank all of the.